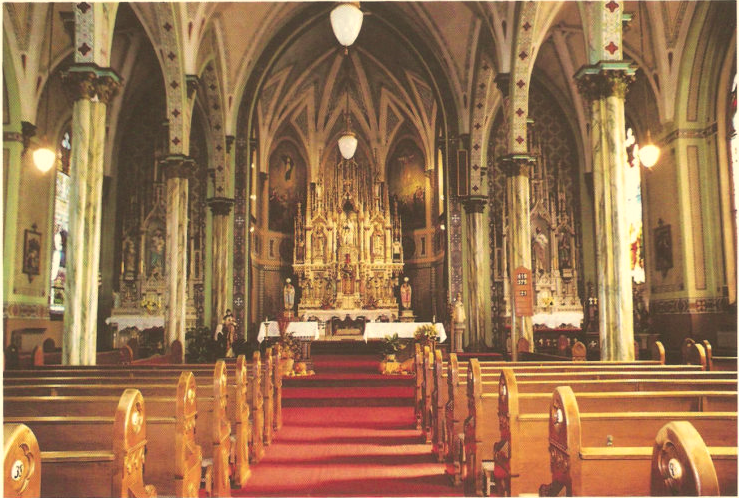 Upon entering the church the eye is drawn to the ceiling soaring thirty-seven feet above the floor. There is stenciled mosaic border throughout the church. Two massive windows in the transept and three Gothic altars create a superlative place to worship. Throughout the church are angels in many forms, a reported twenty-six, as a reminder that this is a church of the angels. Langenfeld Studios last decorated the interior of the church in 1929 with the emphasis on the lines and beauty of the Gothic style. Above the ceiling in the attic running the full length of the church is a catwalk.

Right, The main altar is arrayed with angels and saints. Angels look down from the top. Starting from the left is a small statue of St. Anthony of Padua (1195-1231) holding lilies and Jesus as a baby: next is St. Nicholas of Bari (third and fourth century) holding a crosier and a book with apples on it. In the middle is a guardian angel with a child. Continuing on is St. Blaise (fourth century) holding a crosier and a book with a fish on it and then St. Aloysius Gonzaga (1568-1591) holding a cross and lilies. Both St. Nicholas and St. Blaise are wearing miters befitting bishops. Angels guard the tabernacle and others hold lamps on either side of the altar. The Last Supper is displayed in bas-releif in the altar base. Above the doors on each side of the sanctuary leading to the sacristy are windows depicting the Sacred Heart of Jesus on the right and the Immaculate Heart of Mary on the left. On the walls of the sanctuary are immense canvas murals. The mural on the leftis od the Assumption of the Blessed Virgin Mary into Heaven and on the right is the Ascension of Jesus Christ into Heaven. The four canvas medallions surrounding the sanctuary are of the four Evangelists: St. Matthew (first century). St. Mark (first century). St. Luke (first century).  And St. John (first century). The murals of the four Evangelists were on the ceiling of the previous church. The Holy Spirit in the shape of a dove with a triangle depicting the Trinity is on the ceiling of the sanctuary.

The communion raining, installed in 1912, has been moved to the sides of the sanctuary with angels on both sides.

Image from:
Cathedrals Among the Cornfields
by: Marilyn Schirck Setzler